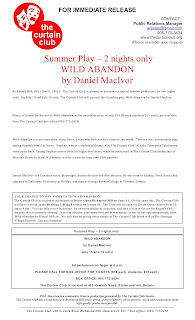 The Curtain Club is pleased to announce a special summer production for two nights only! On July 15 and July 16 only, The Curtain Club will present the Canadian play Wild Abandon by Daniel MacIvor. 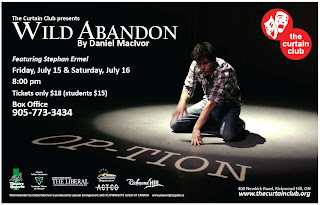 Wild Abandon is a one man show about Steve, a man who believes he’s alone in the world. This is a raw, existentialist play staring Stephan Ermel as Steve. Stephan, who is a student of drama, won The Curtain Club’s Cicely Thompson Scholarship some years back. Seeing Stephan evolve from his highschool years, when he preformed in The Curtain Club production of Marvin’s Room by Scott McPherson, will be a treat for long-time Club patrons!

Daniel MacIvor is a Canadian actor, playwright, theatre director and film director. He was born in Sydney, Nova Scotia and educated at Dalhousie University in Halifax, and then at George Brown College in Toronto, Ontario.

Previous Post: « JUNE 11, 2011 – Join us for Doors Open, and Visit Our Booth at the Heritage Village Festival
Next Post: The Curtain Club was honoured WITH A 2012 Business Achievement Award »