Last night was the third night of the 2011 Theatre Ontario Festival. The audience has now developed a taste for excellence and they were not disappointed. 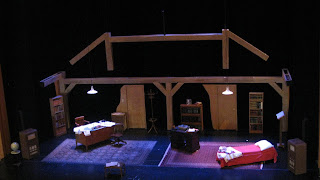 Festival adjudicator Jane Carnwath, during the public adjudication noted “everything about this piece fit.” She comment on the impact that people have on each other, and the many clashes: social class, generation….

FOLLOWING the show, patrons, and the cast and crew met at The Curtain Club for a green room party! 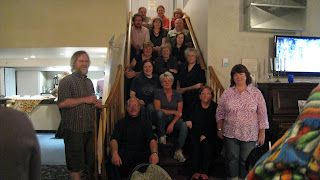 This morning, May 21, Jane provided the cast and crew and several other keen theatre enthusiasts many more tidbits during the private adjudication at The Curtain Club. She commented on the symmetry in the play, as well as the in the choices that the design team had made. She commmented on the many catch phrases in the play — “lace your skates and get on the ice;” “I am a bugger for work;” my mind just left without permission.”

Jane also provided amazing suggestions to the cast on crew on different approaches to the play and even had the two actors stand up and perform several scenes. It was a very positive experience for all. 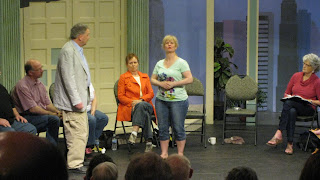 THE FESTIVAL CONTINUES TONIGHT WITH THE CLASSIC “WHO’S AFRAID OF VIRGINIA WOOLF?”
PLENTY OF TICKETS ARE AVAILABLE AT THE RHCPA — WALK-INS ARE WELCOME!