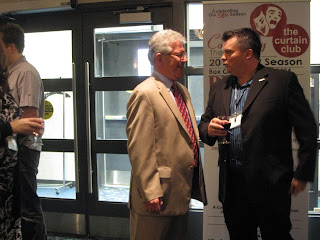 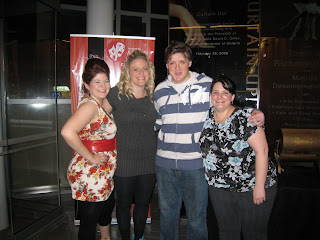 Following which everyone proceeded to The Richmond Hill Centre for the Performing Arts for the opening show of the Festival — SUDS!

(L TO R): Donna Lajeunesse (Marge), Heather Gibb (Cindy), Jason Butler-Burns (Everyone Else), and Heather Johnson (Dee Dee) were the very talented cast from the Whitby Courthouse Theatre that stared in SUDS, the musical that opened the 2011 Theatre Ontario Festival on May 18, 2011.

All day the cast and crew of SUDS had been building their set and running through the technical aspects of the show. Just before supper time, they had a full run of the show to ensure everything was ship shape for their audience at 8 pm.

They were fantastic and the audience was roaring with laughter and even broke into song with the cast a time or two. You could tell that festival adjudicator Jane Carnwath was not disappointed as she made her brief public adjudication following the performance.

Don’t miss the other shows during the 2011 Theatre Ontario Festival. Who knows when Richmond Hill be hosting such as great event in town again.

Previous Post: « after the opening ceremonies — SUDS tonight at the RHCPA
Next Post: Jane Carnwath says “You Succeeded” »