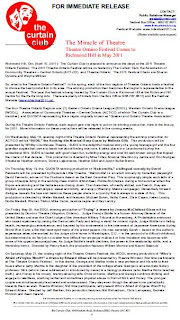 So, what is the Theatre Ontario Festival? In the spring, each of the four regions of Theatre Ontario hosts a festival to choose the best production in its area. The winning production then becomes that region’s representative to the annual Festival. This year the festival is being hosted by The Curtain Club in Richmond Hill at the Richmond Hill Centre for the Performing Arts. There are plenty of tickets from the Box Office (905.787.8811) and the Festival Website (www.tofestival2011.ca).

Previous Post: « The Miracle of Theatre is Coming to Richmond Hill … learn about coordinating properties
Next Post: BUY YOUR TICKETS – Who’s Afraid of Virginia Woolf? »