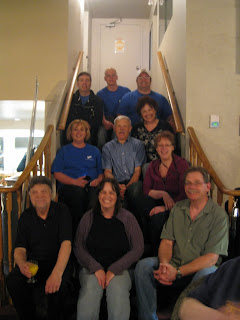 The cast and crew of Balconville took stage last night at the 2011 Theatre Ontario Festival and were an instant hit and scored a home run.

This bilingual comedy was a challenge to some members of the audience at times, but with the steller acting each gesture was clear to interpret and the audience was very impressed by this left wing, political satire, that was also a barrel of laughs. 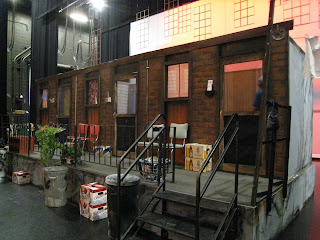 Jane Carnwath, during her public adjudication, commented on the details of the set, noting “it’s fithy up here,” and praised the cast and crew for fully committing to their roles (as actors, set designers, sound designers etc.)

Earlier in the afternoon, Jane Carnwath held a workshop for seasoned and prospective directors. It was well attended by theatre lovers from far and wide. She noted, “make sure it’s clear who’s boss!”

The 2011 Theatre Ontario Festival continues tonight with Trying! PLENTY OF TICKETS ARE STILL AVAILABLE FROM THE RHCPA BOX OFFICE FOR JUST $25 EACH. WALK-IN PATRONS ARE WELCOME, BUT NOTE THAT THE PERFORMANCE BEGINS PROMPTLY AT 8pm.

The EODL winning production of “Trying” is a drama by Joanna McClelland Glass.