On Friday, May 20, the EODL winning production of “Trying” is a drama by Joanna McClelland Glass. Festival co-chair Wayne Miller noted that ‘“Tyring” could be considered a semi-autobiographical work by Glass. It is a smart and witty and focuses on the differences between two people: Sarah – young, female and from the Canadian prairies; and Francis – older, male and a former U.S. Attorney General. 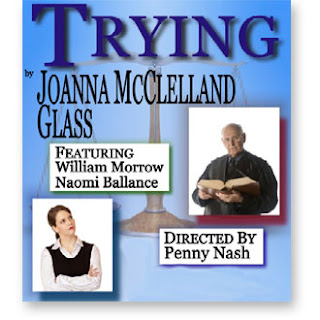 There are so many themes in this play – gender, generational issues, geographic identity. I think this is the play that I most identify with in this year’s Festival and I hope our patrons see all four just to be able to compare Canadian playwright Joanna McClelland Glass was born in Saskatoon, Saskatchewan . Her works have been produced across North America, in England, Australia, Ireland and Germany. Trying (2004) premiered in New York, and has played in Chicago, Ottawa and Toronto. Set in 1967, it is based on Glass’s working relationship as a young Canadian from the prairies with Francis Biddle, Attorney General under President Franklin D. Roosevelt and a judge during the Nuremberg trails.